Around 40% of respondents in Ireland said they will check their customers’ payment records and increase monitoring of their buyers’ credit risk.

Survey respondents in Ireland indicated that 46% of B2B sales in Ireland were transacted on credit terms. 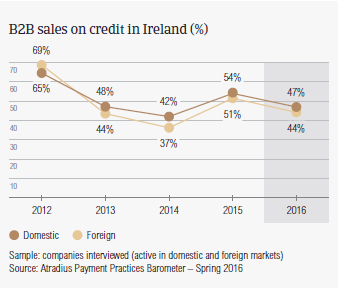 This  percentage, which is  more or less in line with the regional average of 41.3%, highlights Ireland’s credit-friendly business environment.  After Denmark (69%), Greece (56%) and Sweden (56%), Ireland has the highest average of the countries surveyed in Western Europe. However, the 2016 share of sales on credit terms is below the 2015 level (52%), when the proportion of sales made on credit terms in Ireland registered a notable upswing. Consistent with the averages of Western Europe (45% domestic and 38% foreign),the total value of domestic sales (47%) on credit terms in Ireland is slightly higher than that of foreign sales (44%). 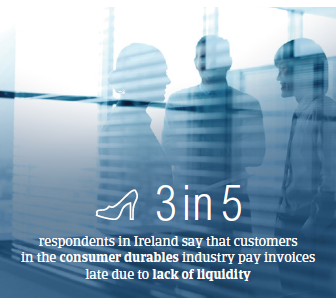 This means that Irish respondents share the perception that foreign sales on credit terms may be riskier than domestic ones.

Late payment of invoices (domestic and foreign) is reflected in the Days Sales Outstanding (DSO) figure posted by Irish respondents. The 2016 average DSO figure is 52 days, which is two days shorter than in 2015 and slightly above the regional average.

54% of Irish respondents do not expect any changes in the DSO level over the coming 12 months.

The strong effort to manage receivables portfolios more efficiently to improve business profitability, evidenced by survey respondents in Ireland, may explain why 24% of the respondents in the country compared to 16% in Western Europe, reported that maintaining an adequate cash flow is one of the biggest challenges they will be facing in 2016.

The average payment term set by Irish respondents for B2B customers averages 29 days from the invoice date, and is not markedly below the survey average (31 days). 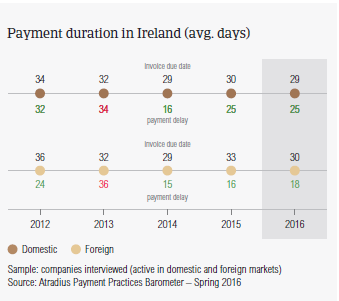 Over the past year, payment terms did not vary markedly, which highlights a consistent payment culture in the country. This payment delay does not show marked differences when compared to 2015. With an average of 43 days from invoicing to turn past due receivables into cash, the average for Ireland is 10 days shorter than the average of Western Europe overall.

A slightly higher percentage respondents in Ireland (50%) than in Western Europe (48.5%) reported customers’ liquidity issues as the main reason for late payment of domestic and foreign B2B invoices. The percentage of Irish respondents reporting this reason has slightly decreased this year (62.5%) compared to 2015 (64.7%). In contrast, more respondents (37%) this year compared to 33% in 2015 reported this payment delay factor in respect to foreign invoices. 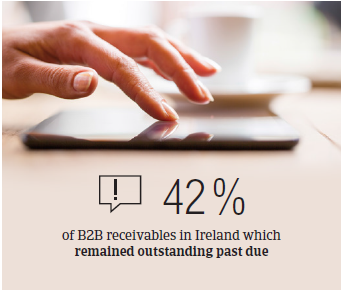 In line with the survey average, about 25% of Irish respondents customers’ intentional use of outstanding invoices for financial advantage was the second most often cited reason for late payment of B2B invoices. Respondents in Ireland believe this occurs more often with domestic than with foreign payments. Late payment by foreign customers is also reported to frequently occur due to complexity of the payment procedure (30.0% of respondents in Ireland versus 28% in Western Europe).

39% of respondents in Ireland said that payment delays did not have a significant impact on their businesses. At the same time, 27% reported the need to postpone payments to their own suppliers and 26% that they needed to take specific measures to correct cash flow. These findings indicate a persistently challenging business environment and a possible need to increase credit management techniques. To address these issues, around 40% of respondents said they will check their customers’ payment records and increase monitoring of their buyers’ credit risk.

The proportion of B2B receivables reported by Irish respondents as uncollectable (1.4%) is consistent with the 1.3% average for Western Europe. 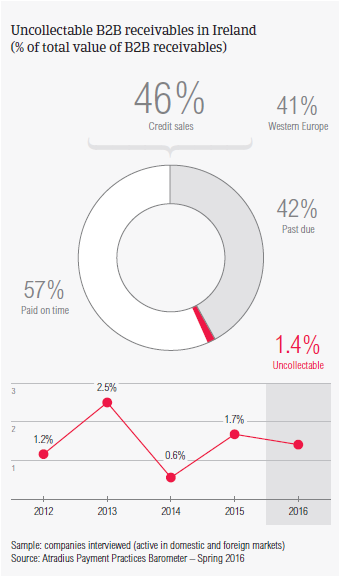 More than half of the respondents in Ireland (58%) said that payment delays in the consumer durables sector are most likely to occur due to a lack of  liquidity of customers. The second most cited reason for payment delays is the buyers’ use of outstanding invoices for their financial advantage, as reported by 42% of respondents.

Over the next 12 months, most of the Irish respondents expect no changes in the payment behaviour of B2B customers in all the industries they mainly trade with. At the same time, around 38% of respondents expect a slight improvement mainly in the construction, business services and services sectors.

The Irish food sector has benefited from the weaker euro, the rebound of the Irish economy and growing consumer confidence.

In 2015, Ireland’s economy is forecast to grow by 3.6%, backed by exports to the US and UK where demand is picking up. Private consumption is expected to increase further.

Global economic growth is expected to be sluggish in 2016. Bankruptcies remain high in the eurozone and are rising in key emerging markets.