The Brazilian economy is going through a significantly challenging phase, which is severely affecting business and consumer sentiment.

Growth is supported by low inflation and interest rates, but will be negatively impacted by the ongoing contraction in neighbouring Argentina, its third largest export market.

Respondents prefer selling to B2B customers on cash than on credit

Respondents in Brazil seem to prefer the safety of sales to their B2B customers on cash than on credit. Reflecting a heightened perception of the payment default risks connected with trading on credit, particularly abroad, the proportion of the total value of respondents’ credit-based sales decreased to 46.4% from 47.3% over the past year. The more cautious approach of Brazilian respondents to offering trade credit to B2B customers is consistent with their concerns about the credit quality of their commercial partners, which is expected to deteriorate over the coming months as anticipated by over 20% of respondents in the country. As the prospects for growth in Brazil appear to be less optimistic now than they were a few months ago, (also due to the increased uncertainties affecting the global trade environment) 2 in 5 respondents in the country anticipate potential liquidity shortfalls negatively affecting business growth. Again, this may explain respondents’ greater preference for the safety of cash sales.

Despite Brazilian respondents’ apparent preference for sales to B2B customers on cash, those respondents who offered credit terms gave customers far more time to pay than last year. Based on survey findings, average payment terms recorded in Brazil increased to 38 days from 32 days last year. This is consistent with the 37 days average recorded in Canada (up from 25 days last year). 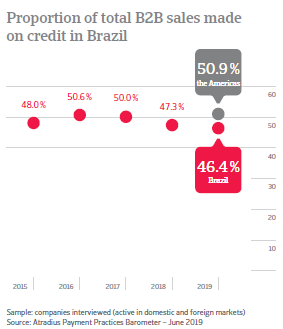 Consistent with other countries surveyed in the Americas, the credit management policy of respondents in Brazil revolves around the prospective buyer’s creditworthiness, and its assessment prior to any trade credit decision. Survey findings reveal that Brazilian respondents (43%) perform checks of their customers’ creditworthiness more often than their peers in Mexico (38%), the US (35%) and Canada (30%). Moreover, in line with their relative preference for sales on cash, 37% of Brazilian respondents normally request secured forms of payment from B2B customers. Reserving against bad debts, which is aimed at ensuring financial stability of the company should the assessment of creditworthiness prove inaccurate, is done by 33% of Brazilian respondents. This credit management practice is used as often as in Canada, and less often in the US (28% of respondents citing this) and Mexico (18%). To protect cash flow from the negative impacts of currency volatility, 33% of respondents in Brazil reported they hedge against systematic exchange rate risk exposure. 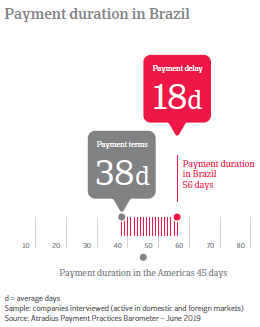 32.5% of the total value of invoices issued by respondents in Brazil was reported to still be outstanding after the due date. This is the highest rate of late payments recorded of the countries surveyed in the Americas (24% in the US, 25.1% in Canada, and 26.6% in Mexico). On average, to turn these overdue invoices into cash it takes Brazilian respondents 56 days, less than the 59 days recorded last year. To alleviate the financial pressure on the business, most Brazilian respondents (43%) needed to take measures to correct cash flow, and 39% were forced to delay payment of invoices to their own suppliers. On average, 2.5% of the value of B2B receivables was written-off as uncollectable (no variation from last year).

Overview of payment practices in Brazil

Trade credit risk is highest in the Brazilian construction sector, and lowest in the metals sector

The value of overdue invoices is highest in the construction sector at 37% of the total value of B2B invoices. The ICT/electronics sector at 33% follows. The metals sector at 27% was lowest.

Respondents from SMEs in Brazil extended the longest and those from large enterprises the shortest average payment terms to B2B customers (averaging 44 days and 30 days from the invoice date respectively).

SMEs in Brazil took the longest to collect overdue invoices 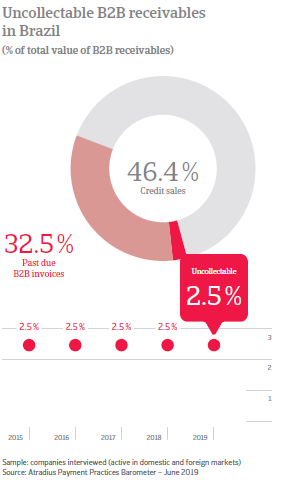 Despite a significant improvement in the payment behaviour of their customers over the past year, Brazilian SMEs appear to be the hardest hit by late payments with overdue invoices accounting for an average of 35.9% of the total value of B2B invoices. The average time it takes them to convert past due invoices into cash is 63 days, up from 61 days last year.

In line with the lengthening of their cash conversion cycle, Brazilian SMEs recorded the highest proportion of B2B receivables written off as uncollectable (2.6%). This compares to 2.5% in micro enterprises (up from, 1.8% last year) and to 2% in large enterprises (down from 2.5% one year ago).

The global economy is losing steam in 2019 and 2020. Ongoing uncertainty regarding the trade war continues to cloud the outlook.

The adoption of a pension reform that provides savings of at least 600-700 billion reais is key to keep public debt sustainable and to sustain invertors’ confidence in the long-term.

Narrow window of opportunity for Brazil

The election of Brazil's new president ends a long period of political uncertainty, but the window for much-needed reform is very narrow.