Economic expansion in Bulgaria is expected to lose some momentum in 2019, but should remain strong at above 3%, spurred by robust household spending, strong wage growth and an improving labour market

Economic expansion in Bulgaria is expected to lose some momentum in 2019, but should remain strong at above 3%, spurred by robust household spending, strong wage growth and an improving labour market. A well-capitalised banking sector, which is also more resilient to shocks than in the past, offers businesses favourable conditions for access to financing. Bulgaria´s long-term economic growth prospects, however, seem to be hampered by the slowdown in the euro area, Bulgaria’s main trading partner, as well as the shortage of labour force.

Bulgaria respondents are the most risk-averse in Eastern Europe, in respect to offering customers credit

Respondents in Bulgaria appear the most risk-averse in Eastern Europe when it comes to offering customer credit in B2B transactions, both domestically and abroad. Based on survey results, 33.6% of the total value of Bulgarian respondents’ B2B sales was reported to be made on credit (up from 24.4% last year). This is far below the 67.2% average for Eastern Europe, and is the lowest in the region. This limited use of trade credit is likely to be a reflection of a payment culture that prioritises the security of payments in cash or in terms other than trade credit.

Consistent with heightened perceptions of trade credit risk,  respondents in Bulgaria reported requesting the settlement of B2B invoices much earlier than last year. Most respondents (82%) granted payment terms averaging 30 days from invoicing (down from 38 days last year). These are among the shortest in Eastern Europe (second only to Hungary) and compare to a regional average of 37 days. The shortening of payment timings recorded in Bulgaria is in contrast to the increase in average payment terms across all of the countries surveyed in Eastern Europe over the past year.

Bulgarian respondents appear to have a heightened perception of the payment default risk arising from trading on credit terms. Most respondents (55%) reported that they request payment on cash or on terms other than trade credit from their B2B customers. Consistent with this observation, far more respondents in Bulgaria (30%) than in Eastern Europe (16%) reported they request secured forms of payment from their B2B customers. However, once a credit sale is made, respondents in Bulgaria focus on sending outstanding invoice reminders (34% of in Bulgaria versus 36% in Eastern Europe). A good proportion also offers discounts for early settlement of invoices (30% compared to 39% in Eastern Europe). This despite the short payment terms granted to B2B customers for payment of invoices. This finding reinforces those seen earlier, pointing to the preference for the safety of cash payments as a distinctive feature of payment behaviour in Bulgaria.

Bulgarian respondents cash in past due invoices earlier than last year

Nearly 20% of the total value of B2B invoices issued by Bulgarian respondents over the past year remained outstanding at the due date. Bulgarian respondents cash in past due invoices significantly earlier than one year ago (37 days compared to 50 days last year). This is a consequence of improved payment timings from B2B customers, resulting in an average 13% increase in timely payments (79.4% of invoices paid on time compared to 70.1% one year ago). This may explain why more respondents in Bulgaria (56%) than in Eastern Europe (52%) reported no significant impact on business arising from customers’ late payments over the past year. However, to manage potential cash shortfalls arising from customers’ late payments 28% of respondents needed to delay payments to their own suppliers. 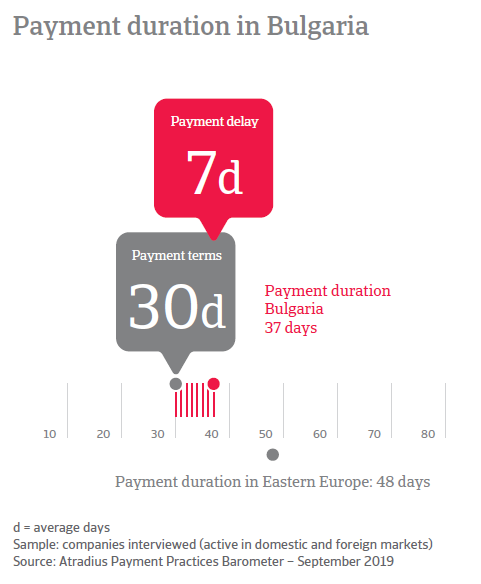 However, should the risk of customers’ payment default worsen over the coming months, 75% of Bulgarian respondents said that they would more often request secured forms of payment from B2B customers should their payment practices worsen. 58% of respondents would intensify the use of outstanding invoice reminders and 54% would more frequently offer discounts to encourage customers to settle invoices earlier than the due date. Should conditions of access to bank financing deteriorate over the coming months, Bulgarian respondents would offset operational cost increases with a significant reduction of their investments in business growth.

Overview of payment practices in Bulgaria

Respondents in the Bulgarian ICT/electronics set the longest payment terms

Trade credit risk is highest in the Bulgarian chemicals sector

Trade credit risk in the Bulgarian chemicals sector has notably deteriorated over the past year, with 23.0% of the total value of B2B invoices past due. Over the past year, the most significant improvement in the speed of payments from B2B customers was observed in both the chemicals and the consumer durables sectors. Payment practices of B2B customers in the Bulgarian agri-food sector did not vary compared to one year ago.

Proportion of uncollectable receivables is highest in the chemicals sector

Across all industries surveyed in Bulgaria, the proportion of B2B receivables written off as uncollectable is less than 1%. This reflects efficiency in collection of long term outstanding invoices as well a relatively moderate use of trade credit in transactions with B2B customers due to a preference for the safety of transactions on cash or cash equivalents. However, the highest proportion of B2B receivables written off as uncollectable was recorded in the chemicals sector (0.8%) followed by the construction sector (0.7%). Respondents from both the ICT/electronics and transport sectors proved to be the most efficient in the collection of long-term overdue receivables (write-off amounted to 0.1% of the total value of B2B invoices). 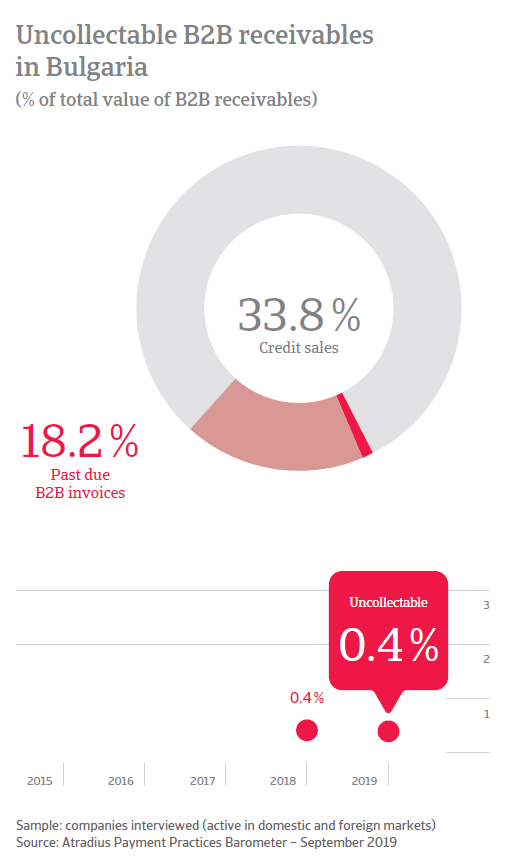 20% of the total value of B2B invoices issued by respondents from Bulgarian SMEs were reported to be past due. However, due to an improvement in the payment behaviour of their B2B customers, SME businesses are now able to collect payment of past due invoices much earlier than in the past (on average 39 days after invoicing compared to 41 last year). The payment practices of the B2B customers of micro enterprises also improved, enabling micros to cash in overdue invoices within 33 days compared to 43 one year ago

SMEs recorded the highest rate of receivables written off as uncollectable

Over the past year, respondents from all business sizes surveyed in Bulgaria reported no significant variation in the proportion of write offs of uncollectable accounts. Despite the improvements in invoice to cash turnaround recorded by SMEs, the proportion of receivables written off as uncollectable was higher in this sector than any other business size surveyed. It is likely that SMEs are less efficient at collecting long-term past due payments than other businesses in Bulgaria.

Of the Eastern European countries surveyed, Bulgaria had the highest DSO and 19.8% of respondents expect another slight increase over the coming 12 months.

Despite a minor decrease in overdue B2B invoices, 45.0% of businesses in Eastern Europe reported having to manage the negative impact of payment delays.

Despite increasing clouds on the horizon, there remain several bright spots for export opportunities in emerging markets.