Compared to one year ago when 57.1% of B2B invoices were reported to be overdue in Turkey, the percentage has decreased slightly in 2017 to 55.9%.

Since 2015 increased political and economic uncertainty has negatively impacted Turkey’s business environment and the outlook for 2017 remains subdued. The difficult environment may have spurred Turkish respondents to increase protection against credit risk and sell more on credit terms than their peers in other Eastern European countries surveyed. 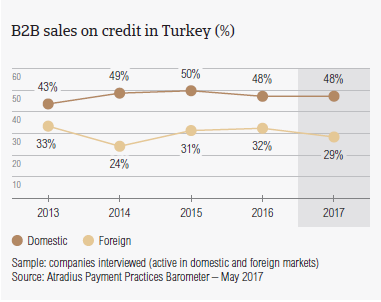 Compared to one year ago (57.1%), the percentage of overdue B2B invoices decreased slightly in 2017 (55.9%). However, the 2017 payment default rate recorded in the country is significantly above the average for Eastern Europe (41.5%). 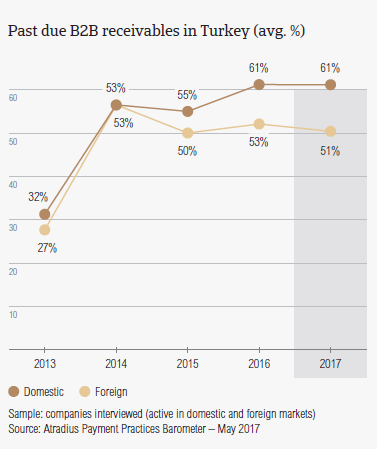 In 2017, domestic and foreign B2B customers of respondents in Turkey enjoyed  the most relaxed payment terms in Eastern Europe. Despite this advantage, they generated some of the longest payment delays. 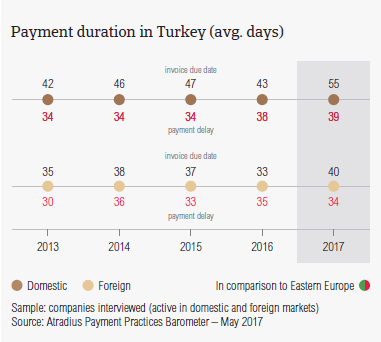 According to respondents in Turkey, the main payment delay factor by domestic B2B customers remains liquidity constraints (cited by 58.0% respondents). In respect to foreign B2B customers, a staggering percentage of Turkish respondents (43.9%) pointed to the inefficiencies of the banking system. 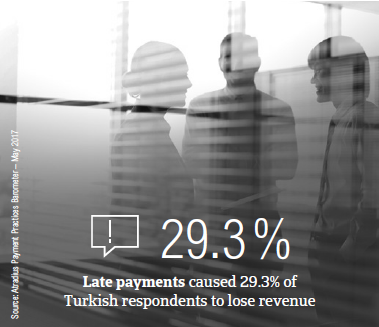 Among the Eastern European countries surveyed, respondents in Turkey seem to be the most inclined to increase their use of credit management tools to protect themselves from risks arising from developments like Brexit, the slowdown in Asia and US protectionism. 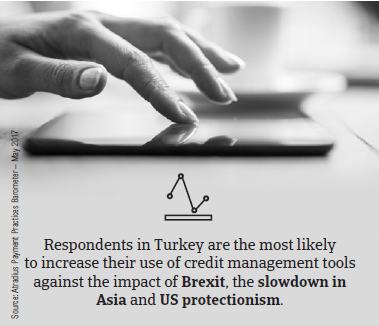 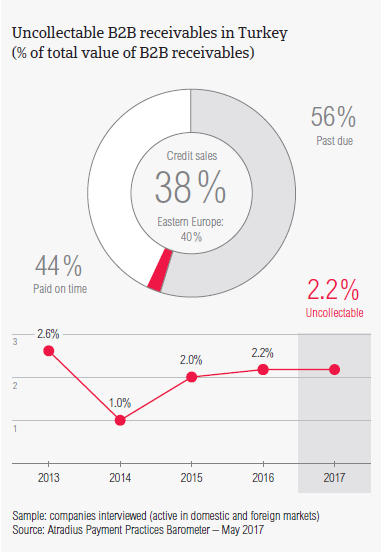 Turkey has the highest percentage of the total value of B2B receivables written off as uncollectable (2.2%) of the Eastern European countries surveyed. This is also more than twice the regional average (1.0%).

50.0% of respondents surveyed in Turkey expect an overall deterioration in the payment behaviour of their B2B customers over the coming 12 months. This is significantly more than the percentage of respondents stating this at regional level (26.0%). 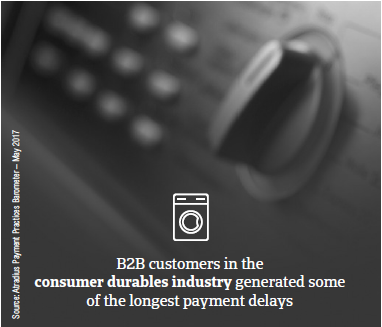 After an increase of almost five percentage points in 2016, the percentage of overdue B2B invoices in Eastern Europe decreased again this year (41.5%).

Payment behaviour of many Turkish businesses has deteriorated since 2015, and key sectors continue to face problems in 2017 due to increased uncertainty.

Foreign exchange risks, fierce competition, high taxes and the fact that many businesses are undercapitalised pose downside risks for the industry.