Sweden: the biggest increase of overdues in the region

The proportion of past due B2B invoices in Sweden has sharply increased from 26.7% in 2017 to 34.0%. Foreign B2B customers had a much higher default rate.

2018 brought many changes for Sweden: there was a steep increase in overdue B2B invoices, a higher average DSO and it took survey respondents in the country longer to convert B2B receivables into cash. The proportion of uncollectable B2B receivables increased slightly and bankruptcy remains the main reason for write-offs. Construction and consumer durables are problematic sectors and further deterioration of payment behaviour is likely to occur over the coming 12 months.

The top reason why Swedish suppliers trade on credit with their domestic B2B customers is, it is a common practice in the industries in which they operate. The second most frequently mentioned reason for trading on credit domestically is the good relationship developed with B2B customers who have proven their creditworthiness and ask for credit terms. When confronted with insufficient information about the customer’s business or payment performance (20.7%), poor payment behaviour (10.3%) or high economic or political risk (10.3%), Swedish suppliers do not sell on credit.

We grant trade on credit with our domestic B2B customers because they are creditworthy and require credit.

The main reasons why Swedish suppliers trade on credit with B2B customers abroad mirror the ones cited with domestic B2B customers – credit sales are considered standard practice and a good business relationship with trusted customers. Top reasons for refraining from offering credit sales are the lack of information on the customer’s business or payment performance (mentioned by 42.4% of respondents) and high economic or political risk in the customer’s country (21.2%).

Trading on credit is the usual practice in our industry.

Late payment on the rise

The proportion of past due B2B invoices in Sweden has sharply increased from 26.7% in 2017 to 34.0% this year. Despite this being one of the biggest changes, it remains the lowest in the region, far below the regional average of 41.8%. Foreign B2B customers had a much higher default rate than domestic B2B customers. 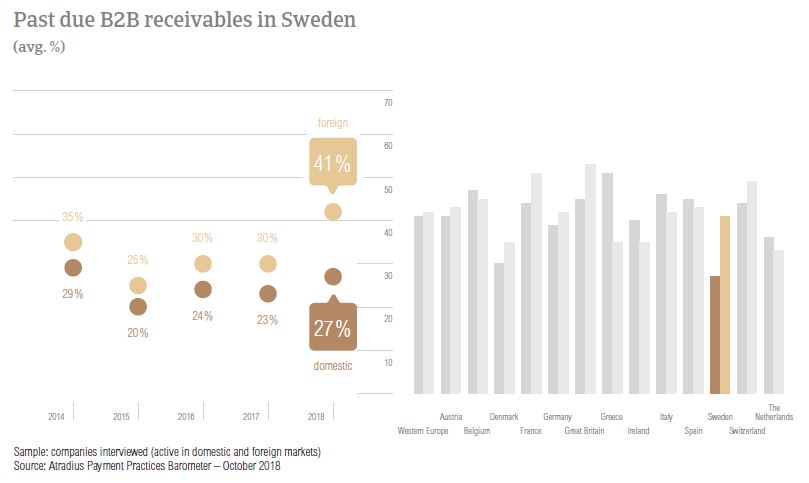 In 2017, the average Days Sales Outstanding (DSO) figure in Sweden dropped to 30 days. This year, it is back at the level recorded in 2016, 34 days on average. Even after the increase, Sweden’s average DSO is 10 days lower than the regional average. Looking at the coming 12 months, 65.2% of respondents do not expect further changes. 20.1% mentioned that they expect another increase and 14.7% foresee a decrease. 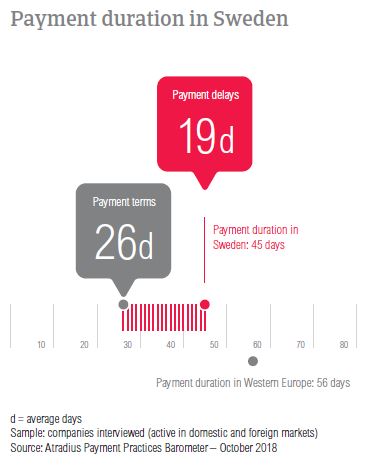 The changes in payment terms and payment delays caused a significant increase in the average payment duration. This stands at 45 days and is five days longer than one year ago. Despite the increase, Sweden still has one of the fastest payment durations in Western Europe.

Based on our survey findings, the main reasons for domestic payment delays in Sweden are insufficient availability of funds (mentioned by 43.0% of respondents), buyers using outstanding invoices as a form of financing (26.5%) and the complexity of the payment procedure (25.6%). In comparison to 2017, an increased percentage of respondents reported the first and third reasons. In regards to foreign B2B customers, suppliers in Sweden reported that payments are most often delayed because of the complexity of the payment procedure (reported by 32.2% of respondents) and insufficient availability of funds (31.1% of respondents). An increased percentage of respondents reported these key payment delay factors in 2018.

53.3% of Swedish respondents said that their businesses have not been affected by overdue B2B invoices over the past 12 months. Of the remaining 46.7%, 14.8% stated that they had to pursue additional financing to manage the impact of late payment. 13.2% of respondents said that they had to default on payments to their own suppliers and 8.2% lost revenue because of past due invoices.

75% of Swedish respondents use electronic invoices 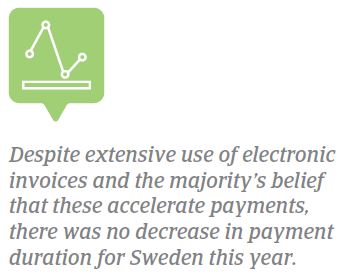 In Sweden, suppliers are mostly invoicing their B2B customers online. 75.1% stated that they are already using this method while another 6.8% want to make the move to the online environment this year. 17.1% of suppliers in Sweden said that they are not using electronic invoices and a low 1.0% that they have stopped e-invoicing.

After invoicing their B2B customers online, 53.0% of Swedish respondents received payments on invoices faster. In contrast, 4.0% reported a slowdown in payment. For 43.1% of respondents, electronic invoices did not have a noteworthy effect on payment duration.

US protectionism seen as the most significant potential risk 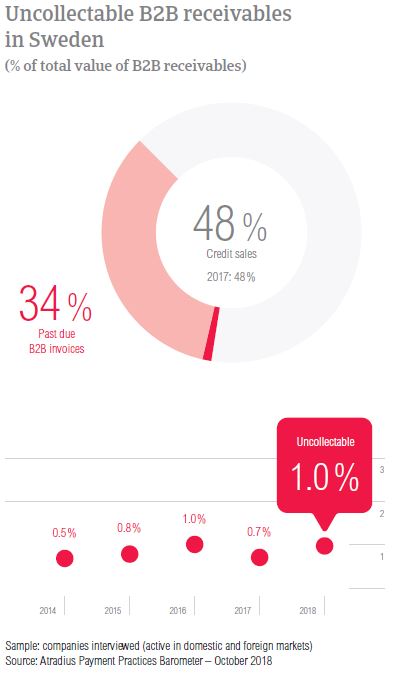 Respondents in Sweden reported that the proportion of uncollectable receivables has gone up from 0.7% in 2017 to 1.0% in 2018. Despite the increase, it is still below the regional average. Similarly to what was observed in past surveys, domestic B2B receivables were written off as uncollectable more than twice as often as foreign B2B receivables (0.7% versus 0.3%).

In Sweden, uncollectable receivables originated most often from the construction, consumer durables, electronics, business services and services sectors. The main reason why B2B receivables were uncollectable was bankruptcy. 50.0% of respondents stated this reason, a decreased percentage compared to 2017 (60.0%). Other main reasons for write-offs were the old age of the debt (mentioned by 27.4% of respondents) and the high cost of pursuing the debtors (26.2%).

Deterioration expected in the construction sector

In 2018, the average payment term given by Swedish respondents is 26 days. This is one of the shortest in the region. By sector, B2B customers in the construction and machines sectors were given the longest payment terms (on average 33 and 32 days respectively). B2B customers in the paper industry and those in the textiles sector were asked to settle their invoices the fastest (within 13 and 14 days respectively).

In 2018, B2B customers in the construction and consumer durables sectors generated some of the longest delays. Based on our survey findings, customers in these sectors paid, on average 22 days and 23 days late. Differently than what was stated in the country overall, the main reason for payment delays in the construction sector was incorrect information on invoices (mentioned by a high 41.0% of suppliers). The main reason for payment delays in the consumer durables industry was buyers using outstanding invoices as a form of financing (cited by 43.0% of respondents). 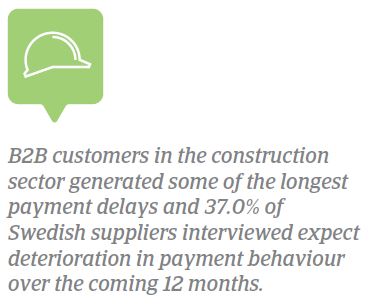 Profit margins are rather high in the sector, with most businesses financially resilient enough to cope with minor volatility in demand or commodity prices.

Pound sterling depreciation in the aftermath of the Brexit referendum in June 2016 has had significant impacts on UK-EU trade flows.

A potential downside risk to the economic performance could be the high household debt in case of sharp house price decreases and interest rate increases.