Another 3% increase in insolvencies, following those recorded in the past couple of years, is expected this year in Sweden.

GDP growth is expected to slow down to below 2%, as both domestic and external demand weakens. A potential downside risk to the Swedish economy remains high household debt, triggered by housing demand and easy access to credit. However, healthy public finances provide room for fiscal loosening in case of an economic downturn.

Swedish survey respondents grant trade credit to their B2B customers far more extensively than last year. Based on survey findings in Sweden, respondents transacted 66.9% of the total value of B2B sales on credit (up from 51.2% last year). The increased use of trade credit in B2B transactions by Swedish businesses appears to be consistent with their need to support export sales. This is particularly the case now that Sweden, as a small open economy highly dependent on exports, is in a vulnerable position where its exporters are exposed to a potential downturn in global trade. 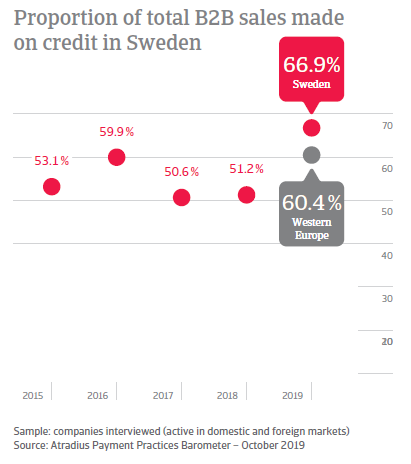 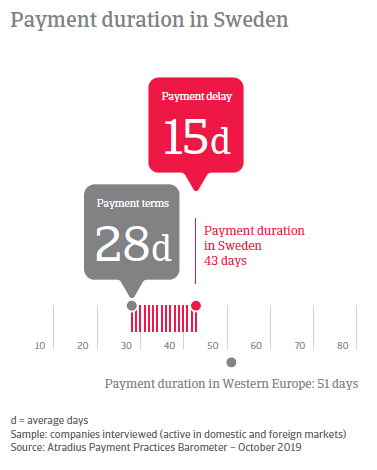 Swedish survey respondents give B2B customers longer to settle invoices than last year. Average payment terms recorded in Sweden stand at 28 days from invoicing (up from 26 days last year). These are far below the 34-day average for Western Europe, signalling a payment culture placing emphasis on prompt settlement of invoices, as also seen in Denmark. However, the more leeway given to B2B customers for settlement of invoices appears to be consistent with, and supportive of, the more liberal trade credit policy undertaken by Swedish businesses over the past year.

Consistent with the increase in the use of B2B credit with slightly longer credit terms, (albeit shorter than the regional average), 33% of Swedish respondents perform an assessment of the creditworthiness of prospective buyers. This is lower than the average for Western Europe (35%). Once the invoice becomes overdue, 24% of respondents In Sweden undertake dunning activities (outstanding invoice reminders). This compares to 28% than in Western Europe.

24.6% of the total value of B2B invoices issued by respondents in Sweden over the past year remained outstanding at the due date. 72.4% of invoices were reported to be paid on time (up from 70.9% last year). The survey reveals that Swedish respondents turn overdue invoices into cash later than last year (on average within 43 days from invoicing, down from 40 days last year). This variation is in contrast with observations for the region overall, where payment duration decreased on average to 51 days down from 57 days last year. Despite the worsening in their invoice-to-cash turnaround, far more respondents in Sweden (50%) than in Western Europe (42%) reported no significant impact on the business arising from late payment of invoices. However, a sizeable 25% reported that due to untimely payment from their customers they had to delay payments to their own suppliers (compared to 27% in Western Europe). In terms of collection of long-term overdue invoices, Danish survey respondents appear to be way less successful than last year. Survey findings highlight that the proportion of write-offs of uncollectable accounts doubled to 2% compared to the same survey period last year. This is, however, below the 2.2% average for Western Europe.

Overview of payment practices in Sweden

Based on survey findings in Sweden, the shortest payments terms are found in the consumer durables sector, which is given an average of 17 days to settle invoices. The longest payment terms are found in the machines sector (on average 46 days from invoicing). Average payment terms across the other sectors surveyed in Sweden range from 32 days in the construction sector, to 19 days in the agri-food sector.

The credit risk trend in the Swedish services sector deteriorated over the past year, due to a sizeable decrease in the proportion of timely payments (75% of invoices paid on time compared to 79% last year). Despite tight payment terms offered to B2B their customers, Swedish respondents from the agri-food sector recorded an average of 32% of the total value of invoices remaining outstanding at the due date. Across the other sectors surveyed in the country, the percentage of overdue invoices ranges from an average of 31% in the ICT/electronics sector to 13% in the transport sector.

The Swedish ICT/electronics sector has the highest proportion of write-offs, (3.1% up from 1.3 last year). This is consistent with sector’s high proportion of late B2B payments. The machines sector follows at 2.8% of write offs (up from 1.3% last year). Across the other sectors surveyed in Sweden, the percentage of receivables written off as uncollectable ranges from an average of 2.2% in the agri-food sector to less than 1.1% in the transport sector.

Compared to the same survey period one year ago, the proportion of receivables paid on time by SMEs customers has decreased to 63% (down from 69% last year). Due to this worsening, Swedish SMEs turn past due invoices into cash far later than last year (on average within 50 days from invoicing, up from 42 last year). In contrast, the average invoice-to-cash turnaround for Swedish large enterprises improved to 40 days, down from 49 last year. Micro enterprises are the quickest in collecting past due payments, with an invoice-to-cash turnaround at 27 days from invoicing, (down from 32 days last year).

Consistent with the observed lengthening of the average invoice-to-cash turnaround for SMEs, this latter appear to be far less efficient than last year when it comes to collecting long overdue payments (over 90 days past due). The proportion of B2B receivables written off as uncollectable amounts to 2.7% of the total value of invoices, (up from 1.3% last year). Large enterprises record an average of 2.1% of receivables written off as uncollectable (up from 1.1% last year), and micro enterprises are at less than 1 % (stable compared to one year ago). 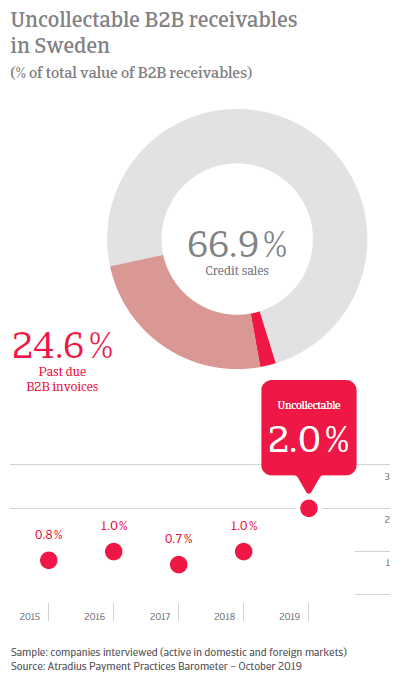 Peter Boberg, Country Director for Sweden commented on the report: “Currently economic performance in Sweden is solid, despite the expected slowdown of the GDP growth due to a weakening of both domestic and foreign demand.

Ongoing global trade tensions and uncertainty surrounding the future relations between the UK and the EU represent notable downside risks to the Swedish economy, adding to an already duller-than-expected business confidence. This emerges clearly from responses of Swedish businesses to our survey. Respondents are pessimistic about the outlook of their B2B customers’ payment practices over the coming months. An increase in untimely payments from customers is expected, with particular reference to long-term overdue invoices (over 90 days past due), ultimately resulting in higher proportions of receivables to be written off as uncollectable.

Respondents appear to be sharpening their focus on risk assessment methods and credit management techniques Among these, credit insurance offers several benefits, including allowing the insured business to gain competitive advantages on the market, particularly in challenging economic times.”

Given the weaker Swedish krona exchange rate it cannot be ruled out that certain suppliers take this competitive edge for granted, delaying innovations.

A potential downside risk to the economic performance could be the high household debt in case of sharp house price decreases and interest rate increases.

Competition in the Swedish construction sector is high and consolidation is ongoing, with financially stronger groups buying financially weaker peers.