Coupled with high interest rates of more than 60% austerity measures will deepen and lengthen the economic contraction, and a rebound expected in late 2019 at the earliest. 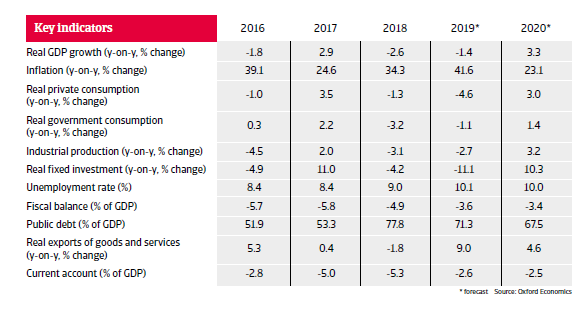 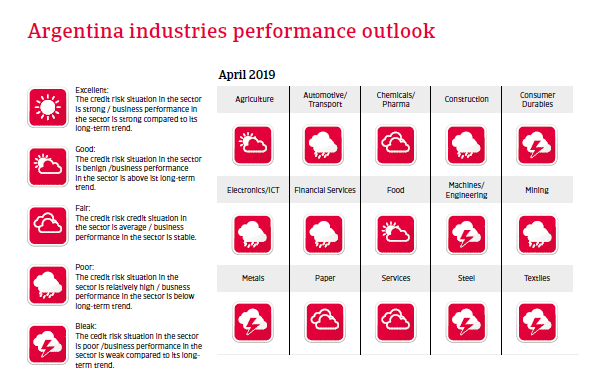 Increasing uncertainty ahead of the October 2019 presidential elections

However, a currency crisis in 2018 and subsequent austerity measures, high inflation and economic contraction have decreased the administration´s approval ratings. The absence of a rebound and inflation reduction in H2 of 2019 could prompt social unrest and diminish the chances of Macri´s re-election in October 2019. This has increased uncertainty about the continuation of his economic adjustment policy. Investors are wary of a government change after the presidential election, especially of a return to the populist economic policies by Macri´s predecessor.

A rebound in late 2019 at the earliest

After a short-lived rebound in 2017, Argentina’s high vulnerability to US monetary policy normalisation and to shifts in financial market sentiment became evident in 2018, as rising yields on US Treasury bonds hit the peso with investors starting to sell risky assets in April. The exposure was due to persistently high fiscal and current account deficits, along with a high share of foreign currency-denominated debt (about 70%).

Argentina was hit by a major confidence crisis after several poorly communicated policy steps, and concerns about its ability to cover its high financing needs. Despite an IMF programme installed in July 2018 capital flight by both foreign and domestic investors continued, resulting in a 50% depreciation of the currency last year and dwindling official reserves. Attempts to stem the outflows by raising interest rates to a record high of more than 60% and tightening fiscal policy failed, as concerns about the high financing needs persisted.

To address those concerns, in September 2018 the IMF increased Argentina´s credit line from USD 50 billion to USD 57 billion and accelerated loan disbursements in order to secure the government’s financing needs in 2019. This has reduced the probability of Argentina´s default for the time being, but in return, the government had to agree to balance the budget in 2019. In order to eliminate the primary fiscal deficit (i.e. before interest payments) public spending on infrastructure, transfers to provincial governments and subsidies for energy and public transport were cut and a temporary tax was levied on exports.

Coupled with the high interest rates of more than 60% the austerity measures will deepen and lengthen the economic contraction. After upward pressure on the peso in late 2018 and early 2019, allowing the central bank to build reserves, the peso has depreciated again since end of February, following concerns over Macri’s chances to win the October 2019 elections. However, developments remain in line with the trajectory implied by the central bank’s non-intervention band (which is adjusted each month to allow for peso depreciation in order to maintain competitiveness). That said, inflation has increased above 50% as a result of the sharp depreciation in 2018 and continued price adjustments. Unemployment is rising, increasing the risk of social unrest.

A rebound is expected in late 2019 at the earliest, mainly driven by exports benefiting from the weak peso and a normal harvest. An increase in farm goods exports (agricultural products account for 50% of exports) would provide an inflow of hard currency and, together with import compression, narrow the current-account deficit. Inflation is expected to decrease in the course of the year, as the extremely tight monetary policy will start to take effect

EU to speed up completion of free trade agreements

The first increase in US interest rates in almost 10 years may lead to trouble in emerging markets.

The Americas - an increase of overdue B2B receivables

The percentage of overdue B2B invoices increased in 2018 impacting 64.1% of survey respondents in countries surveyed in the Americas.